The Loneliness Epidemic Is Fueling the Romance Scam Epidemic. 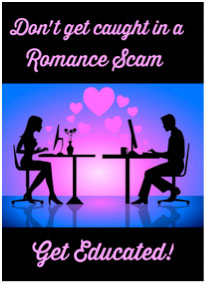 This article is to educate and protect you and your loved ones from online scammers during this holiday season and beyond. Please be sure to pass this information forward.

The Internet is like the wild wild west. It is uncontrolled and where scammers lurk to make their fortune with one of the most profitable scams today, called the “Romance Scam.” The busiest time of the year for scammers is during the holiday season because this is when people are the loneliest and wishing they had someone who loved them and would spend the holidays with them. Once a victim sends money, it is gone forever with no recourse to retrieve it because law enforcement is generally powerless to help retrieve your money.

Who are these romance scammers, and how do they successfully get away with this scam? They are usually Nigerian’s and Ghanan’s between the ages of 10 and 29. In Nigeria, they are called the Yahoo Boys, and in Ghana, they are called the Sakawa Boys. Many times they are recruited from Universities. They are educated and practice their trade and accents. They work in groups and are part of a worldwide network – a new kind of mafia that was started in Nigeria – called the “Black Axe.” Everyone in their group has different skill sets. They are narcissistic, manipulative, ruthless criminals that have no remorse. All they care about is how much money they can get from their victims. Their Black Ax worldwide connections launder the money they scam. The Black Axe is also known as the Neo Black Movement, originated at the University of Benin in the late 1970s. They are known to be a “cult” and to also commit sex trafficking, rape, and movement of illegal drugs. They now have their roots set firmly in every country. In the U.S., they like to set their primary roots in Atlanta, GA, Houston, TX, New York City, NY, and Miami, Florida.

Their favorite drinks are $1,000 bottles of champagne and Hennessy. They drive expensive cars, wear designer clothes and sneakers, and are dripping in gold. When they first get a victim to talk to them, they call their victim a client. Once they get money from their victim, they then call them either a Maga, which in Nigerian Pidgin English means “idiot easily fooled by trickery” or a Mugu, which in Nigerian Pidgin English means “big fool.” They use stolen identities and fake names. They take pictures and videos from social media sites of everyday men, women, children, and men and women from the armed services then hide behind them, pretending to be who they are not.

The Romance Scam is their job, and they are very skilled at what they do. They get away with this scam because they are untouchable in Africa. Why would the African government want to stop the scammers when they are bringing in over a trillion dollars a year to the African economy. Furthermore, in all parts of the world where the scammers steal from their citizens, the authorities consider this scam to be civil and not criminal because the victims freely give their money. They somehow overlook the fact that the victim gave their money under false pretense, and it is an advance fee fraud. The more authorities look the other way; the more innocent citizens will be scammed. To see who these scammers are, watch these video https://www.youtube.com/watch?v=bg4kuP1t53s,

What do romance scammers use to pull off the scam? The Internet has given scammers easy access with just a few keystrokes to every person in the world that is online. The scammer does not have to go anywhere, including an Internet Café, to make millions of dollars a month. They only have to have access to a computer or have a smartphone in their hands. They all now have a laptop and a smartphone. They find their victims on Facebook, Instagram, Linked In, Twitter, Facebook Messenger, Facebook groups, online games, sale websites, and dating sites. They purchase phone numbers and email addresses on the black market so they can text and send emails to reach potential victims. The scammer will send a friend request, message, text, or email. Once the victim replies, the scammer begins his job of being a salesperson to hook the victim. Once the victim is hooked, the scammer asks the victim all types of questions about their past and what they hope for in the future. Once they obtain this information, the scammer then becomes an actor and creates a fairytale from the information the victim provided them that the victim will never want to leave. Yes, this scam is very calculating and effective and designed for lonely people who want love.

They use Google Talk to obtain free untraceable phone numbers all over the world to fool victims of their location. They hide their IP address and have 100% privacy and anonymity with a VPN. They use Google Earth to see what kind of home their victims own, so they know what kind of money to ask for from their victims. They have access to the dark web to get personal information about their victims. They isolate their victims and fill that void of loneliness by chatting, texting, and talking with their victims several times a day, usually through Google Hangouts or WhatsApp. They quickly cast their web of “love words” to catch the hearts and money of their victims. Once this is accomplished, the scammer becomes someone who loves the victim and becomes a drug for the victim. As we know, once the heart is involved and endorphins are activated, common sense seems to disappear. At least long enough for the skilled scammer to steal money from their victims. People not in the scam can easily see the victim is being scammed, but the victim cannot see it till their money is gone, and the lies the scammer tells them have mounted up to many. Even then, the victim does not want to believe it is a scam because the scammer has promised to give them their money back when they come home. So, then the victim’s goal is to get the scammer home. It is like gambling. A person keeps putting money in the machines in the hope of winning back the money they lost, but could not afford to lose in the first place. The victim is now invested with their heart, their money, and the hope of a fairytale future the scammer promised them. Coming out of denial is as difficult for the victim as stopping drugs is for the drug addict. Once they come out of denial, they grieve the loss of a person they genuinely loved, loss of money and loss of hope for a future, and the healing process is lengthy.

Additional things scammers do to their victims

Yes, many victims have done these things, and some have gone to prison for money laundering and accepting stolen goods.

What the victim goes through at the hands of a scammer will many times be too much to handle, and some commit suicide.

Who are the victims? There are always two victims to every scam. The people that have their identity stolen and used by the scammer, and the people that are scammed for money. The people that fall prey and lose money to the skilled and cunning scammer with a clear agenda are smart, but many times lonely, recently widowed or divorced, isolated, uneducated about this scam, and those who think they are too bright to be scammed. They are people between the ages of 40-90 who have expendable income or can access money through loans, credit cards, family and friends, and selling their assets. This scam can happen to your mother, father, brother, sister, grandmother, grandfather, aunt, uncle, cousins, friends, and yes, even you. Nobody is immune!

The role loneliness plays in the success of the Romance Scam. “Loneliness” and the “Romance Scam” are both now worldwide epidemics. Why? Today, three out of four people find themselves alone, isolated, and online either on social media sites, playing games, or on dating sites. The scammers know the Internet like the back of their hand, but the average person has NO IDEA how social media and dating sites or online games work, so they are easy prey for the skilled scammer. When a person is lonely, they feel their social relationships are not meaningful. The scammer gives them that social relationship and allows them to feel like they are important, loved, and no longer alone.

The key is to be as smart as a fox and do one of the two sure way things below to ensure you will not be scammed.

How to not be a victim of stolen identity. One of the major problems with social media is that people are using it and not even sure how it works or the dangers that are lurking. It is imperative to protect you and your friend’s and families’ identities from scammers. Scammers search social media sites for pictures and videos they can steal and use to scam people. You do not want to find you, your children, or friends and family photos on the Internet listed as scammers because you put their pictures out for the world to see. Below is what you need to do to keep you and everyone you love safe.

D.L. Garren is a leading authority on both the Romance Scam and Loneliness. She has helped over 2,000 victims from all over the world come out of denial, heal, and move forward.

She is the author of “Who is the Real Man Behind the Screen? Online Dating: How to Protect Your Heart and Money” This book can be found on Amazon in both paperback and Kindle at https://www.amazon.com/Who-Real-Man-Behind-Screen/dp/099076110X

She is the founder of an awareness non-profit, Silent Victim No More, Int. Corp. You can find a TV show, radio shows, victim stories, and tactics scammers use on www.silentvictimnomore.com.

She is also the founder of the below three Facebook Support Groups.

To learn more about the Black Axe’s, and how a woman lost almost a million dollars and then killed herself because the authorities turned the other way, watch this video. https://m.youtube.com/watch?feature=share&v=xzqXdXZB_N0