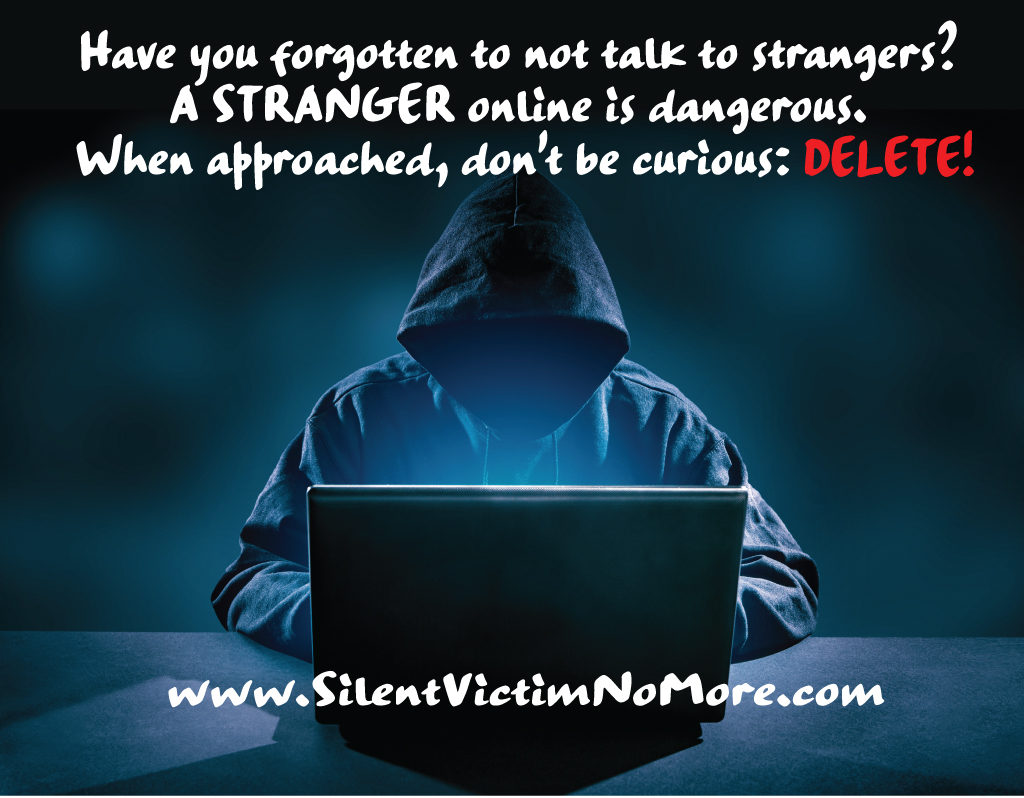 Silent Victim No More operates from a strong and highly ethical foundation of values that ensures our commitment to successful creation of a worldwide movement of education and awareness to stop this hideous crime of the “Romance Scam”.

As users of the Internet increase, so does the epidemic of men and women being scammed for money.

Donate to help bring awareness and education
Be Educated. Get the Book
Listen to radio shows to learn more about this crime
Read stories of victims

Hosea 4:6 – My people are destroyed for lack of knowledge.

At Silent Victim No More, our mission is to create awareness worldwide of the Internet Romance Scam, facilitate educational and awareness programs that will prevent innocent people from being scammed, and provide a safe environment for those who have been scammed. In this environment, victims will come out of denial, break free from their scammer, heal their hearts, learn healthy life skills, and regain their life back. They will go from being a victim to being an overcomer.

Scammers will only do what brings them money. Once the achievement of our mission is fulfilled, people will be aware, educated, and no longer engage with scammers. This will cut off the cash flow scammers once enjoyed, and eradicate the Internet Romance Scam. No more innocent people will have their hearts broken, assets or identity stolen, go to jail, or commit suicide. The billions of dollars that once left our country will now stay in our country and strength our economy.

I encourage you to watch this video to become educated about the “Romance Scammer” that has a worldwide network and deep roots set firmly in every country – and is a new kind of mafia that was started in Nigeria – called the Black Axe. They work in groups. Everyone in their group has different skill sets. They are narcissistic, manipulative, ruthless criminals that have no remorse. All they care about is how much money they can get from their victims. Learn how this particular victim was scammed out of almost a million dollars and committed suicide due to the scare tactics her scammer used on her.

I encourage you to watch this video to become educated about the many ways the global criminal known as the “Romance Scammer” manipulates their victims.

So, how large is the scammer’s playground just in the U.S.A.?

Handicapped: According to the US Census Bureau, 56.7 M people (www.census.gov)

However, most people do not report being scammed and usually lie about the amount in which they have been scammed.

So, how HUGE is the scammer’s playground …just in Canada?

Lonely People: One of the fastest growing trends in recent decades — accelerating since 2000, according to StatsCan — has been the rise in single-person households. In 2006, they represented 26.8 per cent of all households in Canada, 27.1 per cent and the number was 6.8 respectively. (www.cbc.ca/news/canada/one-is-the-loneliness-number-1.850697)

Widows/Widowers: In 2016, about 1.92 million widowed people in Canada. (www.statista.com/statistics/443276/widowed-people-in-canada/)

Divorced: Statistics between 2003 and 2011, place a “lifetime risk” of divorcing, before the 30th anniversary, at 38-41% of Canadians. Quebec had the highest rate of divorce in 2003 (49.7%), whereas Newfoundland & Labrador had the lowest provincial rate of divorce (17.1%). BC’s divorce rate is approximately 39.8% (Ambert, 2005 from Statistics Canada, 2005 and earlier). (www.butterfieldlaw.ca/divorce-statistics-inicanada-a-snapsjot)

So, how HUGE is the scammer’s playground …just in Europe?

Lonely People: Loneliness across different age groups in 25 European nations, with a focus on people of an advanced age. After discussing issues of comparability, we present our empirical findings employing data collected in the third round (2006–07) of the European Social Survey (total sample size 47,099, age range 15–101) which included a ‘self-rating’ loneliness scale. Our results suggest that the prevalence of loneliness does increase with age for the combined sample. However, the nation in which one lives shows a greater impact than age on reported levels of loneliness, with Russia and Eastern European nations having the highest proportions of lonely people (about 10–34% for different age groups) and Northern European nations the lowest (mostly below 6%). Possible explanatory factors are identified and discussed, which provides the groundwork of a subsequent and formal study. [accessed Oct 19 2017].
https://www.researchgate.net/publication/231938718_Age_and_loneliness_in_25_European_nations

Handicapped: The total number of disabled people in 1992 was 81.2 million.

So, how HUGE is the scammer’s playground …just in Australia?

Lonely People: In 1997, 32% of older people aged 65 years and over lived alone. During their waking hours, these people spent an average of 79% of their time alone (12 hours and 26 minutes per day).

Handicapped:  1,264,600 or 8.6% of the population are handicapped. As age increases the likelihood of being handicapped also generally increases.